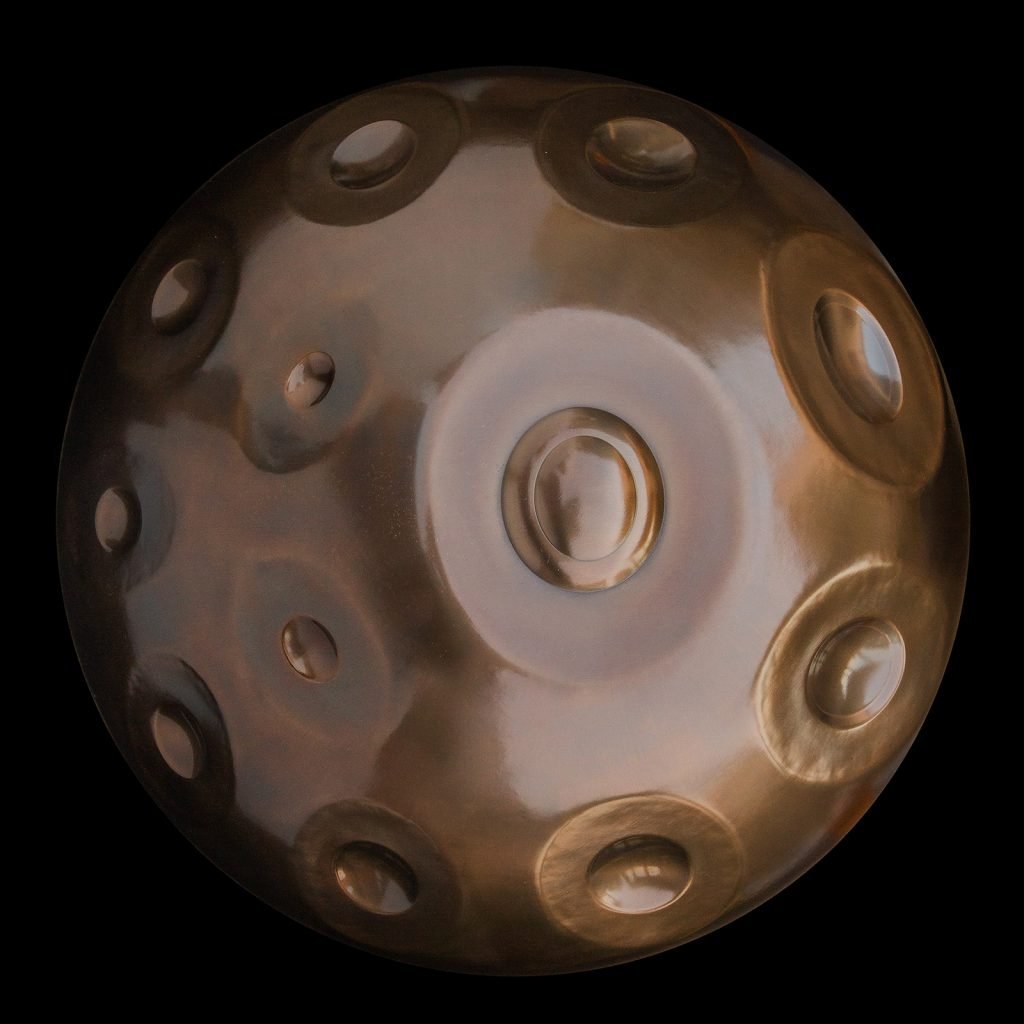 Today we can find several names which define the same instrument – ‘Hang’, ‘Handpan’, ‘Pantam’, ‘Hang drum’ and many others. In this article we will take a look at the history of these names and the actual physical and sound differences between them.

In 1999, the Swiss percussionist Reto Weber visited the workshop of Steelpan manufacturer PANArt and came up with the idea of ​​having a “new” instrument built for him.
He asked PANart to build a new kind of instrument Inspired by the Ghatam combined with the traditional ‘steel pan’ from Trinidad so that he could play it with his hands like a Ghatam.

In 2001 the first ‘Hang’ was born.
The name ‘Hang’ means -hand- in the Swiss dialect and was protected for copyrights by Panart.

In 2001, PANart presented its new instrument, the HANG, at the Musikmesse Frankfurt. From that moment PANart started to focus more on the making of Hanhhang (plural for Hang).

The Hang would be described on the physical level as a smaller instrument than most Handpans on the market. Typically it made of a 50cm shell, which usually has a ding + 7-8 notes around the center note.

Handpan had become a necessary and universally understood term since PANArt had registered the name Hang as trademark for its musical instruments.
The name itself is straight forward – Hand & Pan (Pan symbolising the steel pan from Trinidad).
Today most makers define their instrument as a Handpan. It became the most common and popular word to describe the instrument because using the name ‘Hang’ was copyrighted.

Describing the sound and physical properties of the ‘Handpan’ is difficult. The reason is that it is being used with more than 200 makers around the world, each with its own building techniques and sound.

The origin of the word Pantam originated in Israel.
Apparently the name Hang or Handpan did not catch on in Israel. It is not clear who was the first to use the name Pantam in Israel, but shortly after the Hang found itself in israeli hands it started to be described as the Pantam in israel.

Pan’ once again originated by the steel pans in Trinidad. But the ‘Tam’ is a beautiful combination from the second musical instrument which inspired the creation of the instrument – the ‘GhaTam’.

The Pantam might be described as a more clay sounding instrument, with a strong body which does not produce much metallic and high frequencies, focusing more on the fundamentals and harmonics of each note.

What are the actual physical and sound differences between Hang, Handpan and Pantam?

To be honest, this question is philosophical and the answer can vary between the makers of these instruments.
Some would say that the Pantam has a more ‘clay’ sound similar to the Ghatam.
Others would say that the Hang has a special recipe for making the instrument, creating the ‘unique’ sound of the hang.
The Handpan doesn’t have a specific quality, it is the name which stuck with the public and had the most popular attention.

The world of these instruments is still growing everyday. New techniques of forming the instrument are being developed every moment, new materials, new layouts. The possibilities are endless and we are lucky to be able to live in the time where a new musical instrument is being developed and explored every day.

To define the instrument by its qualities or names is still a challenge.
These definitions are still being processed and explored by many makers around the globe.

These instruments can be used for so many different activities – personal exploration, jam sessions, yoga classes, meditation, emotional work and many more.

We hope this article makes it easier for you to understand what are the differences between the definitions of these newly explored instruments. And remember – eventually it all comes down to your own taste of size, touch and sound!

PrevPreviousWhat is the difference between a ‘Nitrided handpan’ and ‘Stainless handpan’?
NextThe process of building a Pantam – #1Next

This website uses cookies to improve your experience while you navigate through the website. Out of these, the cookies that are categorized as necessary are stored on your browser as they are essential for the working of basic functionalities of the website. We also use third-party cookies that help us analyze and understand how you use this website. These cookies will be stored in your browser only with your consent. You also have the option to opt-out of these cookies. But opting out of some of these cookies may affect your browsing experience.
Necessary Always Enabled
Necessary cookies are absolutely essential for the website to function properly. This category only includes cookies that ensures basic functionalities and security features of the website. These cookies do not store any personal information.
Non-necessary
Any cookies that may not be particularly necessary for the website to function and is used specifically to collect user personal data via analytics, ads, other embedded contents are termed as non-necessary cookies. It is mandatory to procure user consent prior to running these cookies on your website.
SAVE & ACCEPT

Write down your details
and we will keep you in the loop!

Once a month we send our newsletter, which contains Flash sales, Discount offers, Special events, Amazing new music and much more!